Cheerios are manufactured by General Mills Inc. and yes, they are gluten-free. Most varieties of Cheerios are safe and certified gluten-free so just look for the gluten-free label on the front of the box. Also, it is important to note that some people may still have issues because of the oats.

Most varieties of Cheerios are certified gluten-free including: 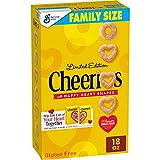 Click here to see how they make Cheerios gluten-free. The head of Cheerio’s R&D department has a daughter-in-law with Celiac Disease and he went on a mission to make them gluten-free.

Cheerios is a popular breakfast cereal that is distinguished by its unique ‘O’ shaped puffed oats and is popular among children and adults alike. The product is owned by General Mills, a U.S. based cereal making company that is also marketed by Nestle in the U.K. and 130 other countries where Nestle has a presence. This cereal is available in a variety of flavors and variations to choose from, all of which are advertised as healthy and nutritious breakfast options.

It all started in 1941 when the company introduced CheeriOats as a ready-to-consume oat cereal. The name was specifically coined to differentiate it from other cereal brands on the market. However, another manufacturer named Quaker Oats considered this name an infringement to their own, claiming that they had already trademarked the ‘Oats’ part before them. While it’s unlikely that Quaker Oats would have won this contention before a court, to avoid further disagreement, they willingly changed their name to Cheerios in 1945.

As for the signature ‘O’ shape, it came after deliberation where 10 different designs and shapes of all sizes were considered for the Cheerios brand, before the creators finally settled on a small ‘o’ shape as the official cereal shape. By 1951, Cheerios had become a top-selling brand under the ownership of General Mills. Today, it still continues to dominate the cereal market with an estimated 1/8 of all cereal box purchases in the United States being Cheerios.

Their products are 100% gluten-free. All traces of wheat, barley, and rye have been removed from the ingredients before production. Only pure oats are used for making Cheerios and customers are assured of the same great taste but without the gluten. The product is marketed as a healthy alternative to ‘bad’ cholesterol. The original Cheerios brand also contains a single gram of sugar per serving, unlike other competitor brands like Lucky Charms which has 10 grams and Fruit Loops which has 12 grams.

1 thought on “Are Cheerios Gluten-Free?”