Cheetos are manufactured by Frito Lay and most of the flavors are gluten-free.

Most Cheetos are Gluten-Free!

According to Frito Lay, the following flavors are gluten-free. 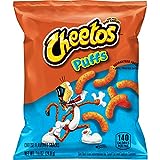 Cheetos are a cheese-flavored cornmeal snack manufactured by the Frito-Lay Company, which is a subsidiary of PepsiCo. They were invented by Charles Elmer in 1948 who then began distribution in the United States. Since the snack primarily consists of corn, one may think that Cheetos are related to tortilla chips but they were actually created to be a side dish for sandwiches and soups.

Soon after its invention, the cheese-flavored snack sold fast but Elmer didn’t have the manufacturing or distribution capacity to sustain a countrywide launch. This led him to partner with a potato-chip entrepreneur, Herman W. Lay, for advertisement and distribution support. The commercial success of Cheetos convinced Elmer and Lay to combine their two businesses in 1961, forming a new company called Frito-Lay Inc.

During that time, Cheetos were among the four largest snack food products sold by the company, with an annual turnover of around $127 million. In 1965, Frito-Lay further merged with the Pepsi-Cola Company forming PepsiCo. The new firm promoted further distribution and marketing of Cheetos outside North America.

In 1988, Frito-Lay introduced a new product line known as Cheetos Cheddar Cheese-Flavored Popcorn and started an intense promotional campaign featuring Chester-Cheetah, a cartoon figure targeted at kids and young adults. By the beginning of the 21st century, Cheetos had full control of the puffed snack food market, with sales totaling almost twice that of the other top 15 competing brands combined.

In 2010, Cheetos was ranked as the most profitable cheese puff brand in the United States. Global annual sales were also equally successful at around $4 billion. While the original ‘Crunchy Cheetos’ are still in circulation to this day, the brand line has since grown to include 21 new varieties of Cheetos sold in North America alone. Nevertheless, the original Cheetos are available in more than 36 nations around the world, but the flavor and texture occasionally vary to match regional tastes and cultural preferences.

2 thoughts on “Are Cheetos Gluten-Free?”