Ruffles are manufactured by Frito Lay and most of the flavors are gluten-free.

According to Frito Lay, the following flavors have been tested and are certified gluten-free.

The rest of Ruffles products are not certified as gluten-free, but are not made with any ingredients that contain gluten. These products include: 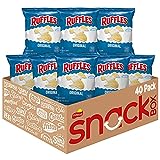 1 thought on “Are Ruffles Gluten-Free?”