7UP is manufactured by Dr Pepper Snapple Group Inc. and yes, it is gluten-free. Remember to drink it in moderation! 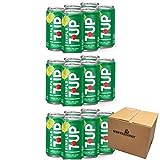 7UP is a lemon-lime soft drink that was developed by Charles Leiper in 1929. It’s widely marketed as a non-caffeinated beverage both in America and around the world. Leiper was born in 1868 in Missouri. After becoming an adult, he moved to St. Louis from Price’s Branch and began working as a salesperson in the carbonated drink industry. While nobody knows what 7UP really means since it’s never been revealed, there are various theories that try to explain how the drink got its name.

Nevertheless, when Charles introduced the drink back in 1929 it had a different name from what it’s called today. The product was known as “Bib-Label Lithiated Lemon-Lime Soda”. Thinking that the name was too hard to pronounce for customers, he later changed it to “7UP Lithiated Lemon-Lime” before finally settling for 7UP. A few years later, the company was handed over to Cadbury Schweppes who have been the official owners since 1995.

Though not yet confirmed, it’s assumed that the number 7 stands for the seven ingredients found in the drink, whereas UP represents the bubbles that rise up after the can is opened. The 7 main ingredients found in this beverage include carbonated water, sodium citrate, citric acid, sugar, lithium citrate, lemon essence, and lime oils. However, it’s also possible that 7 actually stands for nothing and Leiper may have just come up with the name to invoke people’s interest.

7UP’s reference to lithia stayed on the can until 1936. 12 years later in 1948, Lithium Citrate was taken out of the ingredients after the government imposed a ban on its use in canned beverages. Another compound, calcium disodium EDTA, was also eliminated in 2006, at which time potassium citrate further substituted sodium citrate to minimize the amount of sodium. Moreover, the company’s website states that this product doesn’t have any fruit juice extracts. In 2011, the company began promoting a new test formula known as 7UP Retro which was invented to use sugar instead of high fructose corn syrup. 7UP can be found in many countries around the world.