A&W Root Beer is manufactured by Dr Pepper Snapple Group Inc. and yes, it is gluten-free. It isn’t listed as one of their gluten-free products on their website, but there are no gluten-containing ingredients included in the product. Remember to drink it in moderation! 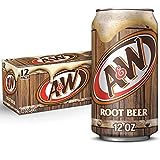 A&W is a root beer product that’s mainly available in the U.S. and Canada. In the United States, all rights to the A&W brand are under the ownership of Dr Pepper Snapple Group. Their products are packaged and distributed by the Coca-Cola Company. The U.S. version is also sold as an imported drink in Italy and Southeast Asia where the company also has restaurants. Other countries where this brand is found include Chile, the United Kingdom, and Australia.

The company’s story began in 1919 during a parade celebrating the successful return of World War I veterans in Lodi, California. Roy Allen put up a roadside stall to offer guests a new thick and tasty root beer drink. His invention became so successful that Roy partnered with Frank Wright in 1922 to further expand the business. They named the company A&W Root Beer after their initials.

Soon afterward, they opened an inaugural root beer stall in Lodi, followed by another one in Sacramento a few years later. It featured a drive-in concept with tray boys offering curbside service. Later, in 1924, A&W pursued a franchising program, becoming the first franchised restaurant group in America to offer root beer. They delivered this drink exclusively to their franchises to guarantee the quality, and by 1933 there were more than 170 locations operated by franchisees.

In October 1993, A&W Root Beer was bought by Cadbury Beverages but they later rebranded their U.S. beverages division to Dr Pepper Snapple Company in 2008. Three years earlier, they had introduced a 20-ounce Vintage Bottle model that featured graphics representing an antique root beer barrel. Today, both Diet and regular A&W Root Beer are considered the most successful root beers in America by all measurable standards. Though much has changed since Allen first opened his roadside store, one thing that still remains the same is the product’s rich and smooth taste. Currently, A&W’s brand tagline is “Classic American Refreshment Since 1919”.