Canada Dry Ginger Ale is manufactured by Dr Pepper Snapple Group Inc. and yes, it is gluten-free. Remember to drink it in moderation!

The following flavors of Canada Dry Ginger Ale are gluten-free: 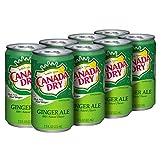 Canada Dry is a ginger ale drink that first began production in 1904. Back then it was known as Pale Ginger Ale. Its creator, John J. McLaughlin, initially owned a water plant in Canada but when he witnessed a rise in popularity of syrup ginger ales in his community, he set out to develop a lighter version that customers would like. This soon became Canada Dry Ginger Ale as we know it today.

During the prohibition era in the United States, this drink became a popular mixer used to mask the strong taste of liquor. Commonly known as the champagne soda, it was mainly marketed to the polished members of society for many decades. Since its inception, the product has been a popular drink choice for those in need of something soothing and invigorating. In the beginning, Canada Dry produced various flavors under their brand name including ginger ale, Hi-Spot, Collins mixer, Spur Cola, cream soda, grapefruit and strawberry among others.

Despite beginning in 1904, the first large-scale production of Canada Dry started several years later in 1948. Under the guidance of Eugene J. Liggett who was the company president at the time, they expanded and increased their market portfolio all over America.

The drink is currently owned by Texas-based manufacturer Dr Pepper Snapple Group. Though they mainly specialize in the production of ginger ale beverages, there are also other items they sell such as mixers and soft drinks. While the company first began operations in Canada, they have since diversified their scope to include Mexico, the United States, the Middle East, and Europe. At a certain point in time, the different flavors had their own unique design labels, but now the company only uses a standard crest logo for all their products.

This brand also has limited availability flavors that are produced in New Jersey such as Black Cherry Wishniak, Pineapple Canada Dry, and Peach Canada Dry. This is one of the oldest soft drinks in the world with a rich history spanning 113 years.