Fresca is manufactured by The Coca-Cola Company and yes, it is gluten-free. Remember to drink it in moderation!

There are a variety of Fresca flavors which are all gluten-free: 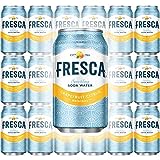 Fresca is a soft drink from the Coca-Cola Company widely marketed as a zero-calorie and sugar-free citrus beverage. The product is bubbly, crisp and has a light taste for those who prefer having a healthy calorie-free drink. The word Fresca is borrowed from Spanish meaning “fresh”, it was first launched in America in 1966.

Since its introduction to the market, Fresca has undergone several changes in ingredients. While it was initially sweetened with cyclamates, this was banned by the FDA in 1969 and thus replaced with saccharin. That was also later replaced by a NutraSweet-brand aspartame. Several years later, acesulfame potassium was introduced as a secondary sweetener in 2005. History has it that United States President Lyndon Johnson loved Fresca so much that he installed a soda fountain containing the drink in his oval office.

In Latin America, Fresca is sold as a sugar-sweetened brand. In 1997, immigrant communities living in the U.S. petitioned Coca-Cola to launch the same product in America. They responded positively though the name was changed to Citra. It became a huge success but was later on merged with the Fanta product line and sold as the Citrus flavor which we know today. In Argentina and Colombia, sweetened Fresca is known as Quatro and marketed using the original brand logos and colors.

According to the manufacturers, the different flavors of Fresca available for sale today are Peach Citrus, Black Cherry, and Original Citrus which consists of a blend of lime and grapefruit. This product is available in various countries around the world such as Algeria, Canada, Bulgaria, Belize, and Costa Rica among others. It was also introduced in South Africa in the 1990s with a series of flamboyant ads featuring stars such as Hakeem Kae-Kazim. Their slogan was “Nothing tastes like Fresca”. Ever since its launch, the beverage has developed a cult following all around the world. While the drink’s packaging has been redesigned several times, its great quality has never changed even a bit.