Gatorade is manufactured by PepsiCo and yes, it is gluten-free.

There are a variety of Gatorade flavors and they are all gluten-free: 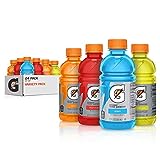 Gatorade is a sports energy drink that was created in 1965 by the University of Florida. It all started when coaches at the institution approached the science department to create a hydrating energy drink. The brand name was borrowed from the Florida Gators football team. This product is currently manufactured and distributed by PepsiCo, with a presence in more than 80 countries across the globe. Gatorade is also PepsiCo’s 4th largest brand when it comes to worldwide annual sales. It contributes to about 75% of the U.S. market share in the sports drink category.

In the summer of 1965, an assistant coach at the University consulted with some physicians, requesting them to find out why most of his players were suffering from heat-related lethargy and sickness. The scientists, Dr. Robert Cade, Alejandro de Quesada, Dana Shires, and H. James Free soon discovered two elements that were causing this condition. Players were losing lots of fluids and electrolytes through sweating, and these substances weren’t being replaced. The large quantities of carbohydrates that players’ bodies utilized for energy were not being replenished.

Following this discovery, the scientists embarked on creating a new, adequately balanced carbohydrate and electrolyte drink that would replace these lost nutrients. They came up with Gatorade. Soon after the product was released, the Florida Gators team began winning games consecutively and even won the Orange Bowl in 1966.

Today, Gatorade is used by over 70 Division I college teams as the main sports drink for men’s and women’s interuniversity games. The company also launched a new Gatorade Endurance Formula in 2005, featuring a higher quotient of sodium and 4 other key electrolytes commonly lost in sweat while performing rigorous activities. Nevertheless, the ingredients of each Gatorade product varies based on the type of product in question, including the country where it’s being sold. Currently, Gatorade is the official sports beverage of various professional tournaments in America such as the NBA, PGA, Major League Soccer and Major League Baseball.