Mello Yello is manufactured by The Coca-Cola Company and yes, it is gluten-free. Remember to drink it in moderation!

There are two kinds of Mello Yello which are both gluten-free: 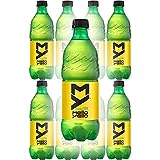 Mello Yello is a citrus soda drink owned by The Coca-Cola Company. It was officially launched in 1979 as the “Globe’s Fastest Soft Drink” with close ties to the National Hot Rod Association (NHRA). This beverage gained massive popularity in the early 1990s when Tom Cruise drove a Mello Yello vehicle in the movie “Days of Thunder”. However, when Coca-Cola launched a new set of citrus brands about a decade later, Mello Yello temporarily decreased in status with distribution mainly tied to the Southeast and Midwest territories of America.

Currently, this drink is ranked third worldwide in the citrus group of beverages, slightly behind Mountain Dew and Sun Drop which is promoted by Dr Pepper Snapple Company. Statistics from Beverage Digest show that Mello Yello sold around 43 million cans in 2012 alone. Recently, Coca-Cola relaunched a new comeback for the brand with the aim of taking it back to its roots. They took over an NHRA sponsorship from another drink brand known as Full Throttle, launching a massive campaign including radio, TV and updated packaging.

Through its renewed marketing strategy, Mello Yello is seeking to attract a more diversified customer base, rather than the teenage consumers it initially focused on in the 1990s. While most fans of the National Hot Rod Association are male and between 18 and 40 years old, it now also appeals a lot to women hence creating a greater market base for Mello Yello. The sport is also popular with different ethnic communities, with a particularly strong following within the Hispanic and African-American populations.

In 2014, Mello Yello partnered with the “American Pickers” TV show from the History Channel where they hunt for handpicked collectibles and antiques. They also ask amateur pickers from all around America to share their specific finds. Mello Yello invited aspiring searchers to enter this competition and showcase their findings for a chance to win big.