Mountain Dew is manufactured by PepsiCo Inc and yes, it is gluten-free.

There are are a lot of different flavors and they are all gluten-free, this includes the following varieties: 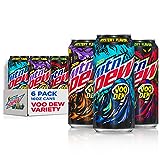 Mountain Dew is a popular carbonated soda brand owned by PepsiCo. It’s available in more than 40 different flavors including Caffeine-Free, Diet, Citrus Cherry, and Original Mountain Dew among others. The drink’s original formula was created in 1940 by Ally and Barney Hartman who was working for Tennessee beverage bottlers at the time. A revised model was later invented by Billy Bridgforth in 1958, featuring a fluorescent yellow color that people were attracted to.

Brothers Ally and Barney originally intended Mountain Dew to be an accompaniment for whiskey. They began packaging the original lemon-lime formula from their base in Knoxville, Tennessee. The two came up with the name “Mountain Dew” to play up the beverage’s intended use as a complimentary drink.

The official rights to this drink were acquired by Tip Corporation and relaunched after some refinement in 1961. However, three years later, the Mountain Dew brand was obtained by PepsiCo in 1964. The new owners expanded distribution more widely within the U.S. and Canada. Today, Mountain Dew evokes in consumers the feeling of pristine alpine conditions, where the drink fuels hikers with energy for extreme athletic prowess.

A short while ago, the company introduced “DEWshine” to the market which is the same citrus-flavored beverage sweetened with fresh cane sugar instead of corn syrup. The product features its original old-school logo, but also revives Mountain Dew’s famous mascot, Willy the Hillbilly, who comes in with the remarkable tagline “It will tickle yore innards”.

Though the original formula has been improved over the years, Mountain Dew’s distinct lemon lime taste still continues on to this day. Moreover, if you choose this soda for your mixer, remember that the drink isn’t just limited to whiskey but a whole lot of other alcohol products as well, but make sure to drink responsibly. In 2011, Mountain Dew posted on their social media account that Mountain Dew Pitch Black would be relaunched later that year. They have also said that they may release other old classics in the future as well. There are also always coming up with new refreshing variations for their fans to enjoy.