Pepsi is manufactured by PepsiCo Inc and yes, it is gluten-free. 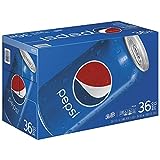 Pepsi is a soft drink brand owned by PepsiCo Inc. The company was formed following a merger between Pepsi-Cola and Frito-Lay. While the parent company originated in 1965, its constituent parties were developed much earlier than this. Pepsi-Cola was formed in the 1890s by Caleb Bradham who was a pharmacist, whereas Frito-Lay was founded in 1961 under the ownership of Elmer Doolin and Herman W. Lay. During its formation, the former chief executive and president of Pepsi-Cola was named the overall CEO of Pepsi. The new company went ahead to report sales of more than $510 million in its first few years of operation, further employing an estimated 19,000 people around the world.

In 1970, PepsiCo moved its offices from New York City to a new location in Purchase, New York. This base is found in a building designed by world-famous architect Edward Stone and it’s set upon a 144-acre space amid an outdoor sculpture lawn. During this time, Pepsi also became the first company to respond to consumer requests with lightweight, eco-friendly, plastic bottles and further introduced the industry’s first 2-liter bottle.

By 1994, Pepsi-Cola became the only major beverage maker to start creating and distributing its brands in Vietnam. They also partnered with Starbucks to form the North-American Coffee Partnership which develops ready-to-go coffee drinks. In 1998, Pepsi celebrated its 100th anniversary with the acquisition of Tropicana Products from the Seagram Company Ltd. It was the biggest ever corporate purchase undertaken by PepsiCo.

About 10 years later, the company announced plans to enter the Chinese market after investing $1 billion. This came as part of their 4-year strategic plan to expand into emerging markets and expand their portfolio of internationally relevant brands. In 2014, the company introduced Pepsi Spire as part of their range of innovative fountain soda dispensers. With it, consumers can create around 1,000 different customized drinks with just a single button push.

2 thoughts on “Is Pepsi Gluten-Free?”