Powerade is manufactured by the Coca-Cola Company and yes, it is gluten-free.

There are a variety of Powerade flavors and they are all gluten-free:

Powerade Zero is also considered gluten-free and comes in many different flavors as well: 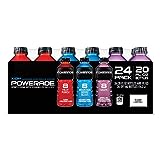 Powerade is a sports drink brand manufactured and distributed by the Coca-Cola Company. It’s available in 12 different flavors within the U.S. such as Orange, Fruit Punch, Mountain Berry Blast, Lemon Lime, Blackberry and Grape among others. The product was first introduced in 1988. During this period it was also the main sports drink of the Olympics Games together with Aquarius, another sports drink from Coca-Cola.

In July 2001, the manufacturers launched a new Powerade formula featuring upgraded ingredients like vitamins B3, B6 and B12. These compounds play a significant role in converting food to energy. Around one year later, Coca-Cola also rebranded the bottles of their standard Powerade brand by introducing a new athlete-grip styling.

They further launched a new product line called Powerade Option in the U.S. as a response to Gatorade’s Propel which was gaining popularity at the time. Powerade Option is a low-carb sports drink that’s colorless and flavored with sucralose, acesulfame potassium and high-fructose corn syrup which provides sugar-conscious users with an alternative rehydration choice. In a recent survey, Powerade Option was given a 36% rating in the Fitness Water category.

Moreover, in 2007, Powerade Zero was introduced as an electrolytes sports drink containing no sugar, no carbohydrates, and no calories. Following its launch, the Powerade Option product line was consequently discontinued. A year later, Powerade was rebranded as Powerade ION4, a product containing four essential electrolytes in the same amount that’s normally lost in sweat.

In 2009, Coca-Cola bought Glaceau which is another brand of VitaminWater and gave control of the Powerade brand to its Glaceau managerial team. As for sponsorships, Powerade is the primary sports drink of NASCAR, the Australian rugby league, the NHRA, and the U.S. Olympic Team (apart from the Soccer and Basketball teams) among other organizations. Apart from America, Powerade is also available in various other countries around the world such as Australia, Iceland, Denmark, France, and Switzerland.