Sunkist is manufactured by Dr Pepper Snapple Group Inc. and yes, it is gluten-free. Remember to drink it in moderation! 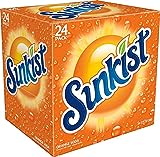 Sunkist is an orange flavored soft drink brand that was first launched in 1979. However, its real history dates back before the drink was even considered to be an orange soda. It began more than 100 years ago when citrus fruit farmers in Arizona and California registered the Sunkist brand name as a symbol of freshness and high-quality flavor. With time, this trademark began appearing on various great products, ranging from fruit snacks to vitamins.

However, in 1979, Sunkist was officially licensed by Sunkist Growers as part of Pepsi-Cola bottlers under the ownership of subsidiary company General Cinema Corporation. This beverage was the brainchild of Mark Stevens. He envisioned the projected market base after research showed that internationally, orange was the 3rd best selling beverage flavor. His idea proved to be a great success many years later.

In May 2008, Schweppes divided its business operations to create a new American beverage division, which was renamed Dr Pepper Snapple Group. Today, the company operates bottling and manufacturing processes on behalf of Sunkist. They have more than 200 distribution facilities across the United States, Mexico, Canada and the Caribbean. Moreover, Sunkist is still the most sought after carbonated, orange flavored drink in America. It’s also sold in the U.K. by Vimto Soft Drinks which is under business permit from Sunkist Growers. The product is also sold in Australia by the Schweppes Australia Company which is co-owned by Asahi Breweries, however, the Australian formula is non-caffeinated. Canada also has a decaffeinated version of the beverage that’s widely marketed as C’Plus.